The story of the Capuchin crypt does not end with the ban of the Emperor Joseph II in 1784. After nearly a hundred-year break, the friars begin to write another chapter and the attention slowly moves from the dead to the living… the visitors. The Capuchin opened the underground gate to allow them to touch their own transience.

But we still do not know how it all started. The monastery chronicle from the 19th and 20th centuries was not, to our regret, preserved. Only little had been captured by contemporary newspapers – so we are on a relatively thin ice now. Documents that would shed light on the events might be waiting for their discovery. 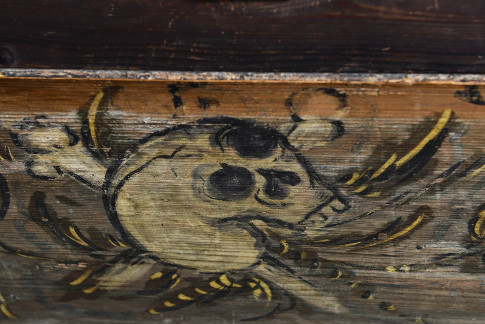 A skull motif on one of the coffins; photo: Zuzana Píšková Hrivňáková

The legend beneath the church

It seems that the new era of the crypt started on one October Saturday in 1872. The day after the feast of St. Francis of Assisi, the Holy Mass for Baron Trenck was held in the Capuchin church. After the mass, the brothers put the remains of the famous Pandur Commander into a monumental tin coffin. Last Austrian descendant of the family Jindřich von Trenck, ex-major on pension, had it done for his grand-uncle. The coffin remained permanently in the chapel beneath the church.

But this was not the end. People could also see a family collection of items that Jindřich collected after his ancestor. Within two days, almost three thousand visitors arrived. František Trenck enjoyed great popularity in Brno. Many curious people used to come to the Capuchin church just for his sake-they could find themselves right over the legend's grave and read his epitaph written in Špilberk prison. These days, he rests in a well-accessible chapel. Did people ask the brothers to be allowed to visit Trenck? And maybe not only him. That fact that the dead bodies in the crypt are being mummified by the air flowing must have been known for some time.

It did not take long, and the brothers took on a new role - guiding. “Let's descend first through the narrow staircase into the room similar to the chapel… The Capuchin friar lights up a wax torch which red light makes us see better,” says the author of the report, published in 1882 in the magazine Ruch. It just sufficed to ring at the entrance to the monastery and present the request. In 1889, Archbishop Franz Ferdinand d'Este visited the crypt together with his younger brother Archduke Otto.

While Baron Trenck's body was resting in the Capuchin crypt, the thumb of his left hand travelled through Brno. The first stop was probably the exhibition organized by Jindřich Trenck in connection with the relocation of the remains of his famous ancestor. In 1876, Jindřich donated this collection to František's Museum (today's Moravian Museum). The fact that the thumb was a museum exhibit at that time was reported by Journal Opava in 1880. After 1904, we could find Trenck's finger at Špilberk in the newly opened town museum. It remained there until March 8, 2017, when it was, upon our request, returned to his owner. However, who and why had torn the thumb away still remains a mystery.

During the First World War, Brother Zeno Diviš (1887–1976) who is going to affect the events in the crypt and become the custodian and author of the historically first guide, joins the Capuchin community. And it was probably him who decorated the chapel walls with skulls and bones. This very well-known scene will not be forgotten by several generations of visitors. Transience, however, absorbed this decoration as well. It definitely perished in 1996 at the Brno Crematorium. The ash is stored in one of the closed coffins.

During Zeno Diviš era, two rooms were also repaired and used between the chapel and the crypt itself; previously you could only walk through this “dark corridor”. Coffins receive glass covers and backings. Journalists, thanks to the interpretation of the Capuchin friar, are beginning to notice other benefactors than Baron Trenck. Our attention also attracts a minor adjustment from the beginning of the occupation. On the orders of the Nazis, the brothers had to remove the sign Sic transit gloria mundi. “The transience of world glory” was apparently not compatible with the vision of the millennial empire.

One of the ventilation openings in the crypt; photo: Zuzana Píšková Hrivňáková

After the expulsion of the brothers and the seizure of the monastery by Communists, Mons. Karel Černý (1879–1963) took care of the church and the crypt. In 1961, he was replaced by another diocesan priest Mons. Ludvík Horký (1913–2008). Thus, tourism remained practically untouched.

With Ludvík Horký, also the Brno academic sculptor and restorer Jaroslav Vaněk (1914–1991) comes to the scene. He creates series of sculptures for the crypt but his handwriting could also be found in the church. In addition to wooden carved Bethlehem, it is also an altar and a statue of the Apostle Judas Tadeas.

Master Vaněk also designed a Baroque stucco relief with a Capuchin emblem which decorates a brick mensa in the crypt of the chapel. The mensa is adjacent to the original Baroque altar on which a coffin of the Christian Klemenciána was placed around 1970.

A skull motif on one of the coffins; photo: Zuzana Píšková Hrivňáková

After 1990, the Capuchins started an extensive and time-consuming reconstruction of the whole area. The crypt itself was also changed. Visitors are led into in by a narrow aisle beside the church, ending in a small courtyard decorated with a fountain by an influential academic sculptor Otmar Oliva. The dead Capuchins are symbolically separated from the living visitors by a glass wall. The remains of bodies that fell to pieces over centuries are reburied in a brick tomb. And the entire crypt tells the rediscovered stories of those who have rested there.

But the most attention attacks – who else than – František Baron Trenck. In 1986, he underwent an anthropological expertise by RNDr. Tomáš Dacík. Twelve years later, a team of experts under the leadership of Professor Miroslav Hirt from the Institute of Forensic Medicine in Brno studied Trenck's DNA. In 2017, for change, the team of Associate professor Petra Urbanová from the Institute of Anthropology of the Faculty of Science at Masaryk University drew attention to the mummy of the Pandur commander. One of the outputs of this extensive project involving several institutions will be a 3D model of this legendary soldier.

As you can see, the next chapter of the story of the Capuchin crypt is just being written.