Visiting Trenck in the crypt

When and why did the Capuchin brothers actually open the crypt to the public?

This is a question that has been bothering us for a long time. Witnesses who could tell, of course, have not lived for a long time, and the archives of the order are more than sparse to mention the crypt in Brno. We therefore tried to look into the period press.

So far, we found the oldest report from a visit to the crypt in the Tagesbote diary from 1855. However, it gave us only a partial answer, however – as we will see – not so surprising. 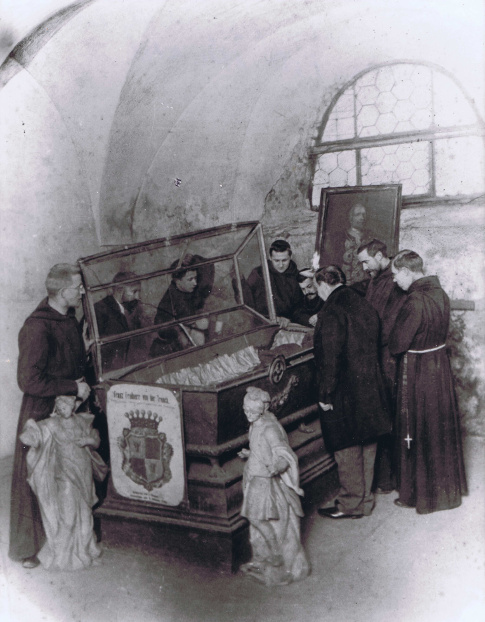 The article actually writes about Franz Trenck, a brave and dreaded commander of the Cops, a soldier in the service of Empress Maria Theresa. Already during his life, he enjoyed considerable attention, which he himself was able to nurture effectively, including the book edition of his memories. Later, the example of a genius soldier in history books began to appear as the main character of the novels. No wonder that people wanted to see the place of Trenck's last rest. As the report states: "This circumstance entices foreigners to visit a tomb whose quiet peace and quiet would otherwise be very rarely disturbed."

However, we will no longer learn from the author of the two-part column whether the Capuchins allowed entry immediately after Trenck's death or even after burial was stopped in the tomb due to the Josephines reforms. He merely states that at the time he himself visited the crypt, it was a common affair: "I have already read several reports of passengers searching for Baron Trenck in the Capuchin tomb. But what happened to many happened to me: what can be seen every day, you will see only after years, or not at all. It was only these days that I asked to enter the tomb, and I was allowed to do so with great kindness."

And what did such a visit to František Trenck in 1855 look like? The Capuchins first introduced the columnist to the dining room, where a Trenck´s portrait made by František Kautzký still was hanging. They probably then left the monastery to the courtyard behind the church, which is now decorated with the Otmar Oliva´s fountain, and entered directly into the room where the exhibition of Baroque frescoes by Ars Moriendi is currently located. In that niche, in which we can now see the lid of a baroque coffin and a copy of one of the frescoes, there was originally a door. The author of the article writes that the brothers used this place as a carpentry workshop. Then they passed through another vaulted area, now the resting place of the Grimm family, and continued down a narrow corridor. "A few steps then lead even deeper to the tomb. It is completely simple – airy and very dry, so the bodies inside are stored and mummified for a long time."

Around the coffins of the benefactors, they headed straight for the deceased Capuchins, who were "resting side by side on the bare ground". František Trenck was originally buried just like them. At the time of our columnist's visit, however, he was already in a massive oak coffin. And even though ther was no inscription, there could be no doubt about the identity of the remains, "men of extraordinary size and strength" must have clearly belonged.

We can read from other articles that the Capuchin tomb was "opened" to the public by Trenck. When the daily Moravská orlice invited František Trenck, the chief of the Pandurs, to the play The Life and Death of the Pandurs in November 1870, he added that "the main character of the piece is famous in Brno, as almost everyone saw the tomb of baron Trenck in the Capuchin crypt in Brno".

And when, in 1872, the brothers transferred Trenck's remains to a new pewter coffin, which they left in a well-accessible chapel under the church, the opportunity to visit the late Pandur was greatly simplified. The interest in the visitors is evidenced by a notice in the Moravská orlice from 1876. The Capuchins inform that this year, but also for years to come, the tomb due the great Franciscan celebration of Porciunkule will be closed, "there is no one of order who could serve to the visitors".