The Capuchins arrived in Brno in 1604 at the invitation of Olomouc Bishop František of Dietrichstein. For their first monastery they chose a place in the eastern suburbs which was called “In front of the Měnín Gate”. In the spring of that year, they laid the foundation stone. The construction was probably funded by cardinal Dietrichstein and Moravian provincial governor Ladislav Berka, brother of the Prague archbishop Zbyněk Berka of Dubá, who initiated the arrival of the Capuchins in Bohemia. 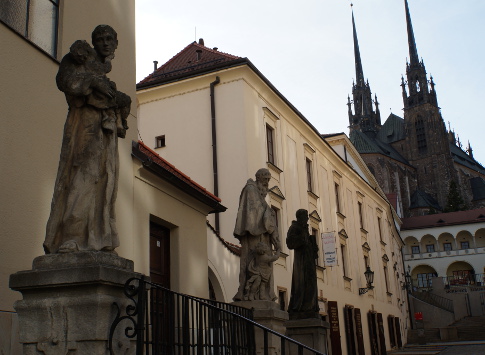 The first monastery outside the walls

We do not know what the monastery looked like. But apparently, it was not unlike the one that stands below the cathedral on Petrov these days. The Capuchins used to build according to a uniform model, which was only adapted to terrain conditions. The church was dedicated to Saint Francis of Assisi, and in 1606 it was consecrated by Cardinal of Dietrichstein. It was decorated by an outstanding painter Kosmas of Castelfranco, the priest of Venetian province, who worked not only for emerging Capuchin churches but also for the Emperor.

At the end of the Thirty Years´ War, when the Swedes besieged Brno, the Capuchins lost their monastery. The military commander of the town Raduit de Souches had ordered to destroy all the houses outside the walls so that the Swedish troops could not find a foothold. In March 1645, the Capuchin monastery was demolished. The brothers soon found asylum at the old town hall and later lived in a townhouse next to the Bishop's Court.

The Second monastery on the Coal Market

The Capuchins chose a place for their second monastery on the Coal Market today´s Zelný trh (Vegetable Market). The construction lasted eight years (1648–1656) and considerable technical and financial difficulties emerged during it.

The piece of land for the new church was donated by Count František Magnis, brother of the Capuchin diplomat Valeriano Magni. Three houses, which were later demolished, were standing there. Six other houses in the neighbourhood had been bought for the construction of the monastery. The Capuchins received money for the building from benefactors, among them the biggest Moravian provincial governor Kryštof Pavel of Liechtenstein-Kastelcorn and Ferdinand Mencl of Kolsdorf, royal tribunal associate in Brno.

Second Capuchin church was solemnly consecrated on May 7, 1656, by Olomouc auxiliary bishop Jan Gobbar. However, after six years already, it was necessary to bear his brick arch down due to poorly built walls and non-solid foundations. For almost hundred years, a flat wooden ceiling replaced it.

The greatest flowering of Capuchin

During the 18th century, under the leadership of Brno builders and architects Mořic (Maurice) Grimm and later his son František Antonín, the monastery undertook significant structural changes. In 1753, the church was extended by the chapel of Saint Fidel and the wooden ceiling was replaced with a new brick arch.

The Monastery was extended by Trenck wing, which is usually given in connection with money bequeathed to Capuchins by famous mercenary commander Franz Baron Trenck. In 1764, construction of a new library in his was part of the monastery finished. To this day, it has preserved the original Baroque furniture and book collection including about eight thousand volumes. The ceiling is decorated with a fresco by painter Josef Stern, which depicts a conversation between two greatest theologians of the 13th century Saint Thomas Aquinas, a Dominican and Saint Bonaventure of Bagnoregio, a Franciscan.

Moravian Museum took over the monastery after expulsing the brothers in April in 1950. This communist action was called the action "K". Moravian Museum moved here its depositaries after the reconstruction in the late 50s and 60s. Construction work, although structurally saved monastery buildings, wiped out their historical character and specific features of Franciscan architecture.

The Capuchins returned to their monastery in 1990. In the mid-90s, they started a gradual reconstruction of the premises, which gave back the building its original Baroque character.