Church of the Finding of the Holy Cross

Capuchin Churches (and monasteries) have typical architecture throughout the world and therefore are very similar. In fact, they were built by the single Belgian-Flemish pattern that returns to the original model of poverty proclaimed by Saint Francis of Assisi.

Similarly, the Capuchin church in Brno is a simple early Baroque building. It was consecrated on May 7, 1656. The facade is decorated only with a large wooden cross. Missionary mosaic above the entrance portal dates from the 1950s. It depicts Saint Francis of Assisi preaching to birds. It replaced the fresco of the Finding of the Holy Cross from the 18th century which was destroyed by the weather conditions.

From the Capuchin history

The main altarpiece, as the name of the church suggests, depicts Saint Helena in an imperial robe leaning over recently found Christ's cross, and resurrection of a dead woman who touches him, thus confirming its authenticity. The image was painted in 1655 by German painter and writer Joachim von Sandrart and it is one of the most important Baroque altar paintings in Brno.

The decoration of the church largely reflects the Capuchin history; images portray order saints Felix of Cantalice († 1587), Fidel of Sigmaringen († 1622) and Joseph of Leonessa († 1612). In a side chapel, there is an impressive scene of stigmatisation of Saint Francis of Assisi and in front of the church his contemporary, the great Franciscan preacher Antonín of Padua. Most of the paintings are from the mid-18th century and it is not certain who the authors were, perhaps they were monastic painters. Two of the paintings are attributed to Austrian painter Lukáš Kracker.

Miraculous painting of the Madonna

The painting of the Madonna of Passau on the side altar of Saint Fidel is mysterious. Most likely, it is a work that the Capuchin chronicle mentions as "miraculous painting." It is bound to the legend of miraculous aid given to the owner of the painting, imperial councillor Francis Anthony de Cattani, by the intercession of the Mother of God. Before his death, he bequeathed it to the Capuchins brothers to be publicly venerated in the church. The painting is a faithful copy of famous work by Lucas Cranach the Elder (probably in 1641). The original (1537) can be seen in the Bavarian city of Passau.

The Gothic statue of the Madonna with the infant Jesus placed on the wall in front of the church is even older. This version of well-known Madonna Kladska (from the 1460s) dates from the first quarter of the 15th century. 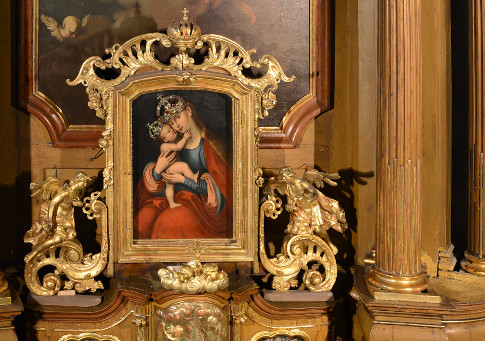 During the 18th century, under the leadership of Brno builders and architects Mořic Grimm and later his son František Antonín, the monastery including the church underwent significant structural changes. In 1753, the chapel of Saint Fidel was built next to the chapel of Saint Francis. The whole church got a new vaulted ceiling. In 1747, in connection with the celebration of the canonization of Fidel from Sigmaringen and Josef of Leonessa, a choir was built and a year later Holy Masses were accompanied by the first solid organ.

The greater part of the interior decoration of the church, which has been preserved until the present day, comes from this period of Baroque heyday. This includes large wrought reliquaries donated by Barnabáš and Victoria Orelli in 1751.

In 1765, statues of Franciscan and Capuchin saints by Brno artist Jan Adam Nessmann adorned the terrace in front of the entrance the church. They are from left: Josef of Leonessa, Fidel of Sigmaringen, Francis of Assisi, Anthony of Padua and Felix of Cantalice. The figure of Saint Lawrence of Brindisi by Czech sculptor Čeněk Vosmík was added in 1927.

The second big wave of changes falls into the 20th century, between the two world wars. The church received a new organ powered by electricity, for which the choir had to be extended to the front arc. Its design copies the Baroque and Renaissance elements. Also, part of the stained glass in Art Nouveau style comes from the 1920s, but the author is unknown. Younger stained glass, from the 30s, was probably created by Brno workshop of Jiří Říha.

Photographs from this period show that the church was newly painted with numerous decorative elements on the walls and ceiling. The arc between the ship and the presbytery bore the scene of the Last Supper. Pictures from the 70s no longer show clean white walls.

In 2012, the church interior undertook extensive renovations. In addition to new lighting and heating, it received a complete painting. In 2014, the repair of the façade followed and a year later a demanding restoration of the organ.